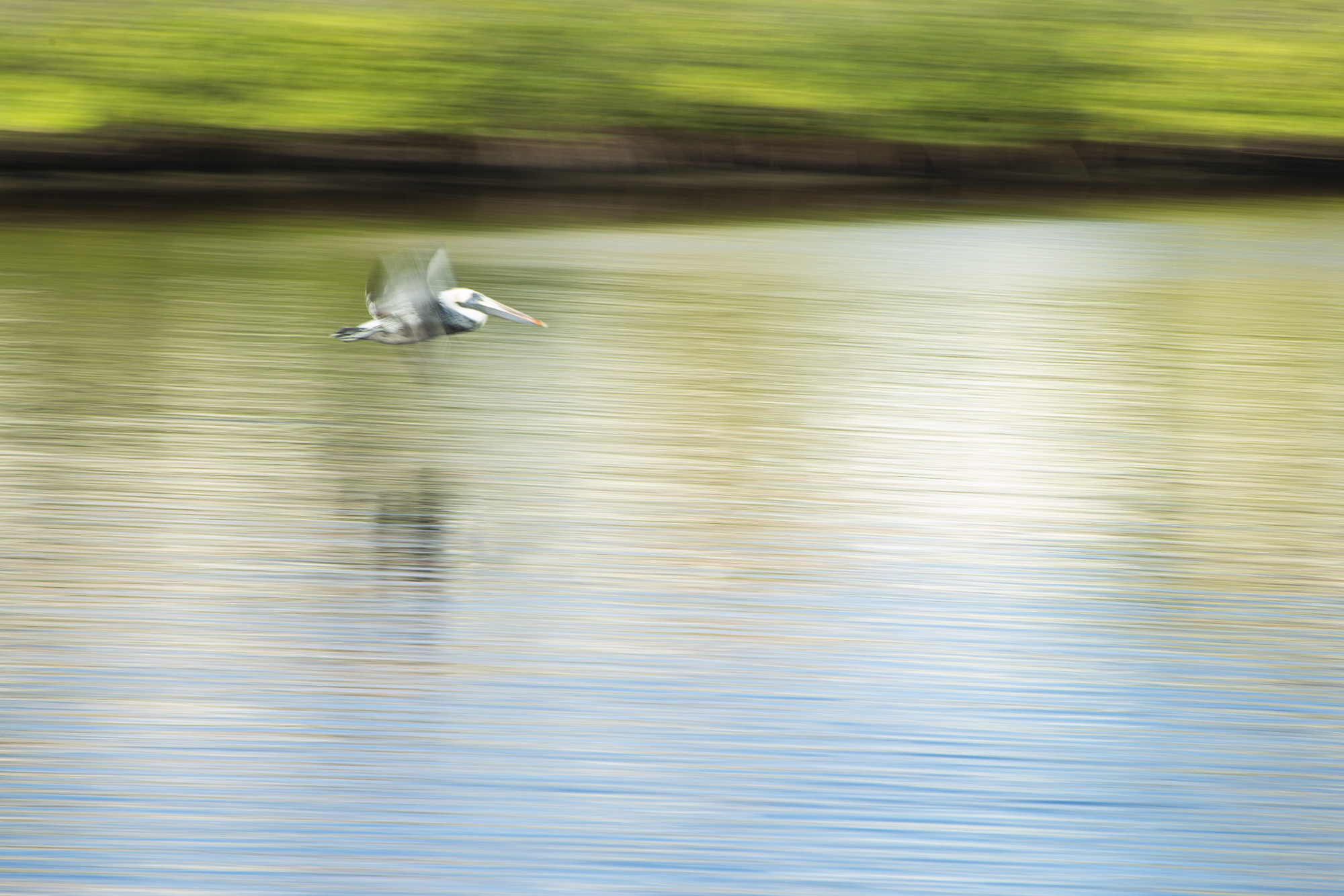 A Guest in the Wild

The sand on Anclote Keys is peppered with broken shells.

Strolling along the water’s edge feels like walking on freshly fallen snow and I relish the cacophony of crunches that sing out from every step.

After a couple of days exploring the marine life on the artificial reefs off the coast of Pasco and the Werner Boyce Salt Springs, a small group of us head out to the Anclote Key Reserve State Park, an (almost) uninhabited island off the west coast of Pasco County. The Eastern edge of the island is thick with dense mangrove forests that can only be explored by kayak, paddleboard or canoe. A crescent moon of white sand runs the length of the western side of the island and is around a five-mile walk from end to end.

The only person who lives on the island full-time is Park Ranger Tod Cornell. He returns to the mainland once a week to get parts for things that have broken, to drop off and pick up his mail, and to shop for groceries. His cabin is run entirely on solar electricity, with a back-up generator on-site just in case, and he makes his own freshwater using a reverse-osmosis desalination unit.

“I grew up on a farm in Ohio and my nearest neighbour was three miles away, so I’m used to being alone with lots of space. Even now when I go to the grocery store, I wonder how people cope with how busy it all is. People ask me if I get lonely or bored, but I look at the life over there [on the mainland] and I think that’s craziness. I don’t think I want to be a part of that,” he tells me. “If I ever have to move off this island, that will be tough. It gets into your soul. I plan on being here for a good long time.”

His house is situated on the southern end of the island in the shadow of a 101-foot tall lighthouse. The Anclote Keys Light was built in 1887, to aid with navigation and the sponge-diving industry that was growing in Tarpon Springs at the time. A keeper lived on site at all times up until 1952, when the lighthouse was automated. However, after the keepers were removed, the lighthouse was frequently vandalised and fell into disrepair. It was deactivated in 1985. Nearly 20 years later it was given a new lease of life by being listed on the National Register of Historic Places and by 2003, it had been fully restored. The light, which consists of a tiny bulb that Tod shows me in the palm of his hand, is lit every night and relies on a complex system of prisms known as a Fresnel Lens to send strong beams out to sea.

As we look out over the wild reaches of Anclote from the top of the lighthouse, Tod points out his favourite spots, the nests he likes to keep an eye on and the areas that have been artfully burned. Fires are a naturally occurring event in Florida, so the park rangers try to mimic this. The philosophy is that a lot of small and controlled fires are much better than one large one that runs out of control – that could decimate the whole island. “We burn it on our terms,” Tod explains. “All through the year organic debris inevitably stacks up, then when summer rolls around we might get a lightning strike and it would just go up.” The native plants thrive on the fallout from fires in the area. For example, pinecones from the resident pines will open in the heat and release their seeds as a result of fire or intense summertime heat.

The sole goal of every park ranger I meet during my time exploring the wild areas of Pasco is to help maintain the native wildlife in a natural balance, without being plagued by any invasive species, or ‘exotics’. “The main prerogative here is to maintain natural balance,” says Tod. “It’s a constant battle out here with the exotic plants, especially the Brazilian pepper and Australian pine. If we don’t control them, they will just take over and before we know it all the native plants will be gone.”

We set up camp on the northern end of the island, so that we are surrounded by the water on the best part of three sides. The patch of ocean in front of our campsite provides boundless entertainment. Goofy seagulls pick their way along the shoreline, calling to each other softly. Every now and again a slightly larger wave will take one by surprise, knocking it off its feet and sending it scooting up the beach looking bewildered. After the ride, they stand up and waddle sheepishly back to the water’s edge, as if this had been their intention all along. For the most part they are ignored by the herons and terns, which sit idly while the sandpipers and Wilson’s plovers hop and scurry about. A pair of American oystercatchers even make a rare appearance, plucking at the sand.

Bottlenose dolphins herd their prey right up into the shallows before gambling over to the North Sandbar around 100 metres away, no doubt to pull the same trick on another unsuspecting school of pinfish, mullet or redfish. Once or twice a shark fin crests along the surface of the waves.

We have one neighbour, a man who had apparently already been camping on the beach for four days and plans on staying for another ten. We don’t speak much until we leave, when he gratefully takes some water and rations off our hands. I watch him get out of his tent and head to the water’s edge with a fishing rod in the mornings, and he disappears off for most of the day on a tiny red sailboat. His fire flickers in the evenings. It is the perfect place to sit with the kind of solitude that is sought out, rather than inflicted.

On the first night, I try my first s’more – the American upgrade of roasting marshmallows over the campfire with the welcome addition of cinnamon crackers and a slab of chocolate – and fall into a restless sleep, trying not to listen out for the hooting of the great horned owls nesting nearby. The nest had been built by ospreys the previous year, and even though a pair of bald eagles had apparently gone in for a viewing, the owls had won the spot. They work smart, not hard, by letting smaller birds build the foundations, then they’ll commandeer it and remodel it to suit their tastes.

We wake to find that we have had visitors to our campsite in the night. Raccoon prints are littered across the site, but unfortunately for them, we’d locked everything of interest away from prying paws before turning in. I find one solitary, sandy and desperate print on the side of our cool box, but never actually see any of the critters with my own eyes.

Time slows down and any mental to do lists melt away. Suddenly a mosey around a lagoon or casual beach walk can take up the best part of an afternoon because there’s so much to look at. There are birds to watch, nests to try and peer into, shells to examine, horseshoe crabs to send scuttling back into the water and fallen tree trunks to clamber around. Following the tiny bird tracks that meander in and out of the waves and trail around patches of seagrass turns out to be an endlessly rewarding activity.

While exploring along the sandy edge of the island I bump into Tod on a small quadbike. He’s been out to log a small turtle that’s washed up on shore, unfortunately dead. In the winter, younger turtles will sometimes get cold-stunned by the chilly waters and wash up on the shore. If they’re still alive, Tod will call someone from the aquarium in Tarpon Springs to get them warmed up and released. There are a few loggerhead turtle nesting sites on the island that are closely logged and monitored, and sometimes Tod will spot a green turtle passing by. On the rare occasion, he’ll spot a Kemp’s Ridley – he explains how there are only around three Kemp’s nests in the state of Florida, and one of them is on this island. While the season usually starts in April, he doesn’t start to see nesting activity on the island until the beginning of June. At this time, he goes out early in the morning to try and find them before the raccoons do, so he can carefully dig a trench around the nest and sink a metal cage over it to protect them from predators. Inevitably, the vivacious birdlife is closely monitored too.

“We have a shorebird survey around eight times a year – the park biologist from Honeymoon Island will come up here with a group of volunteers and they’ll walk the beach with binoculars and clipboards counting the numbers of different species,” he tells me. “They’ve got a long list of birds they try to monitor, and it has to all be done in one day because well, they’re birds, they’re pretty mobile.”

The highlight of each day is the sunset, which shifts from pastel pinks to moody blood orange before plummeting into inky blues. There’s something special about watching the moon rise and the sun set at the same time while swaddled in ocean on nearly all sides. In the morning, I drink my coffee and watch the sun peek back up over the horizon exactly where I expect it to, while the moon disappears into blue skies.

The island is noisy, but apart from the odd plane gliding overhead, the symphony consists purely of birdsong, insects, gusts of wind and tumbling waves. It feels somehow important to understand that I’m a guest in this particular patch of wilderness, to be polite around the nature here – it holds all the cards. There are Eastern diamondback rattlesnakes lurking in the grasses, so every step off the beach needs to be a careful one.

While the island is popular for a day on the beach in the summer, it’s the winter months when it truly shines. The insects are feasting in warmer climes and the powerful sun gets broken up by clouds. It’s peaceful and provides plenty of space and time for reflection. It means stepping away from the hubbub of day-to-day life, even if only for a few days of slow adventure. I indulge in a thoroughly restorative combination of pottering and exploring. Whether moseying down the beach or heading off into the mangroves on a kayak, my curiosity is ignited. It’s a welcome reminder that not all adventures need adrenaline, and sometimes the most important work is maintaining a natural balance, both in the wilderness and inside our own heads.

Article and photography provided with permission from Oceanographic Magazine.

Fun Things To Do Off the Field